For the longest time, I never really considered myself a poet, a writer, or any other kind of “artist”...

For some of the above, that remains the case, but, as far back as I can remember, I've always carried some kind of notebook on me, and I've always filled it with something. Be it poems, bizarre (and loooong) journal entries, short stories, drawings, comics, there hasn't been a time where I haven't loved having something to pour my imagination into. 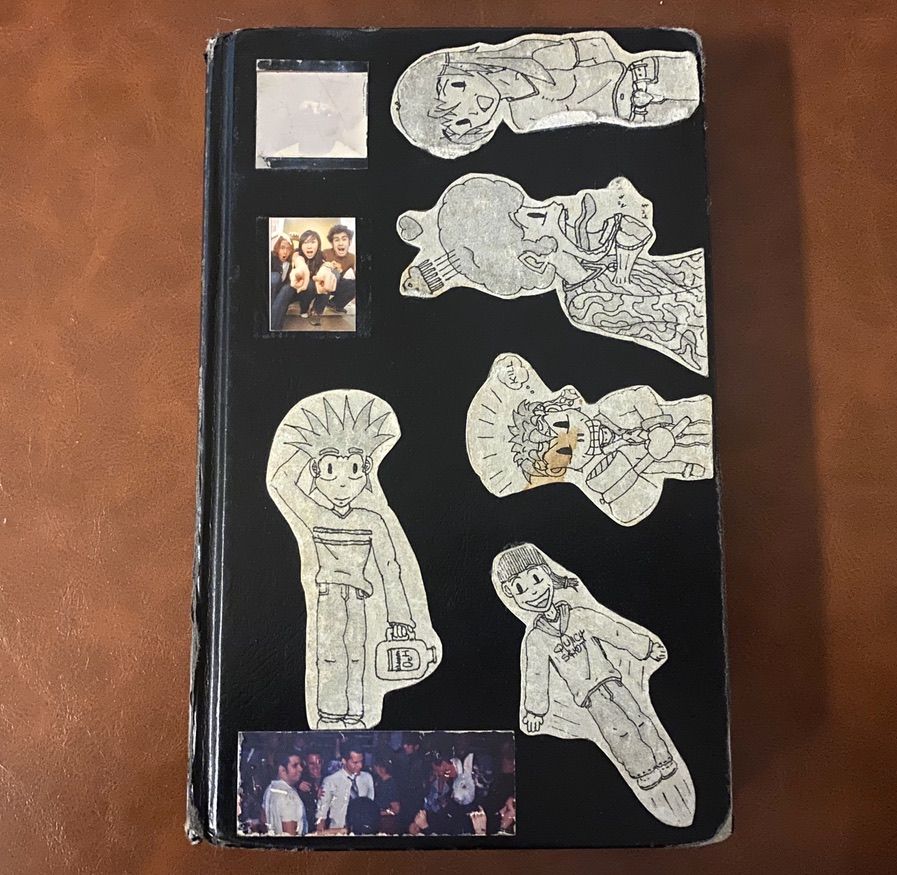 By High School, I had reached a point where I'd believed I had refined this personal practice, discovering these blank hardcover “book-sized” sketchbooks at my local Michaels, where I later worked. The idea of having a notebook I could keep on a shelf alongside all of my favorite books was incredibly exciting for me at the time, and I couldn't wait to start.

I carried the notebook pictured above (shown decorated with cut-out drawings and faded photographs) for the majority of my time in High School, as well as a small chunk of my first years of College down in Fort Lauderdale. Some major moments in my life, both good and... not-so-good, are chronicled within, in the form of poetry and one-page drawings. I also set aside space in the back for friends and anyone else who happened to read through the book to leave a message, school yearbook-style, with their thoughts on what they'd read.

Revisiting that book now, there's so much that makes me smile.

I ran a website around that time as well, now long-since gone, where folks could go and browse through my poetry and artwork I had uploaded. It wasn't much, as I was never that amazing at making websites, but it served as a place for me to put my stuff out there and break out of my shell a bit.

As all of this was happening (I believe when I was a Sophomore in High School?), I stumbled upon some little books in the poetry section of a bookstore near my family home, self-published by a fellow named Javan. Even now, I don't think anything I've randomly happened upon has ever quite hit me in the way that Javan's four books have.

In my lifetime I hope to develop

Arms that are strong Hands that are gentle Ears that will listen Eyes that are kind A tongue that will speak softly A mind full of wisdom A heart that understands – Footprints in the Mind, by Javan

One by one, as I had the money, I bought them all. They've traveled with me to every city, state, every apartment I've ever lived. 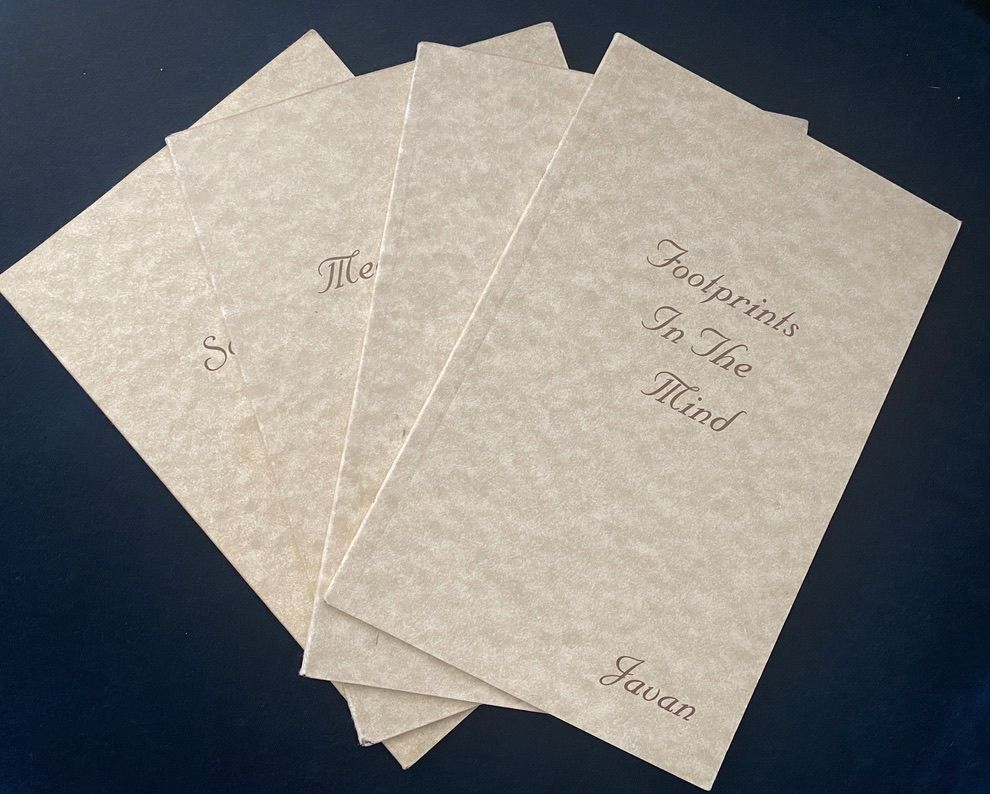 I wanted to respond, but, for some reason, High School me was incredibly nervous. I must have written and deleted a hundred or so drafts before finally developing the courage to hit send, well over a year later. Unfortunately, within seconds, I received an auto-response telling me that the address I was trying to reach no longer existed, and my response was thus undeliverable. In my lengthy struggle with the send button, Javan had likely moved over to a new email address/provider, as many folks seemed to do back then, myself included.

To this day though, a print-out of that email remains pinned to a cork board on my wall, where it has served as a little charm of inspiration, and has managed to get me through multiple bouts with Writer's Block and self-doubt.

Javan's books had also given me the hope that maybe I too could self-publish something one day. Shortly before moving to Gainesville, I began my first attempt.

Around that time, I had both discovered zines and started my first real attempts at making music. At some point, I had the idea to put a “concept zine” together, collecting writings of mine from 1992 through 2004 (2nd grade through first year of College) and supplemental drawings. I wanted to include a mini-cd in a little sleeve in the back with cute ukulele songs about growing up, the theme of the whole project. I had planned to title it “Welcome to Adulthood, Captain!” inspired by something said to me by a doorman at a bizarre sports bar I had been taken to on my twenty-first birthday.

For quite a while, “Welcome to Adulthood, Captain!” remained stuffed inside an old envelope, one that ironically a good friend once shipped me one of their zines in, and the thought of putting it out there became shelved in the back of my mind, coming up once in a while, but never really going beyond that.

But then, 2018 happened. During a Summer backpacking trip in Japan, I reconnected with an old friend in a charming craft beer bar in Tokyo. During our catch-up, I learned that they made a living self-publishing novels on Amazon. The whole story is a lot cooler than that (at least, I think so), but this post is already getting quite long, so I'll leave it at that. Long-story-short, I had somehow not considered the state of self-publishing since I first put pen to paper for “Welcome to Adulthood, Captain!” about a decade prior.

This wake up call to the existence of digital services for such things made my long-term goal feel more realistic than it ever had and revived my drive to finally finish what I had started.

During pockets of free time in 2019, I copied pages over, paper to PC, one-by-one. My current inability to scan the accompanying drawings in without them looking gross has led to a decision to leave them out of the current digital release. 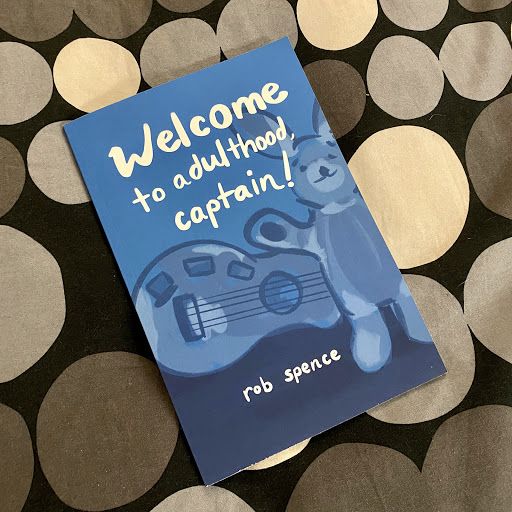 So yeah, over ten years later, here it is... A collection of writings from a much younger me. I hope you find some enjoyment in the words within. It was a fantastic journey, and I feel very fortunate to have made it to the end.

Available On: Kindle eBook and Paperback