“And do you know what else, Margaret? All the police could find was this little drawing.” “You're kidding!” “Not in the slightest, dear. A little sketch of a piece of cheese.” “Good gracious me, what is the world coming to?”

I couldn't help but eavesdrop on the two women, presumably old friends, behind me. I doubt they noticed. My forehead had been pressed up against the bus window since I'd sat down, watching all the shops and restaurants I had yet to visit fly by in a colorful blur.

I'd say it was raining cats and dogs, but I've recently been informed that's offensive. It was pouring, though, making me dread the next step in my day's journey.

It had been a month to the day since I'd first arrived in Whiskershire. After cuts at my old job, I realized it was time for a change. To be honest, I wasn’t entirely sure what I'd be doing when I got here. I thought the unknown would be part of the adventure. Turns out it just makes me anxious and nervous.

I was thus incredibly fortunate to have happened upon an ad in the Whiskershire Gazette at a local pub, being used as a make-shift coaster for my whiskey sour. Encircled by a wet ring, it read:

WANTED: POSITION TO START IMMEDIATELY Personal Assistant to Renowned Detective Must be Organized, Well-Groomed, and Not Allergic to Cats. Non-Negotiable.

Seemed like a welcome change from “computer repairman,” to say the least. Safe to say, any detective work I’d be seeing would be nothing like the movies, but it seemed bound to have its exciting moments nonetheless.

And hell, it was a job. Extra appealing when you don't currently have one.

The bus came to a stop about a block from the destination specified in the ad.

“This is you, champ,” the driver, an older gentleman with a rather wild mustache, called out in a gravelly voice. With the weather being as it was, there were only a few passengers on the bus, which I’m sure made it much easier to remember who was stopping where without anyone having to yank one of the cables hanging by each window.

I thanked the driver and exited out the back.

I followed the ascending house numbers until I reached the address I’d been reciting in my head since stepping off the bus.

Doubting my memory in another wave of nervousness, I pulled the torn newspaper page from my messenger bag to double-check.

I took a deep breath. “I guess this is it,” I whispered to myself, and began to ascend the short staircase to the front door of the three-story brownstone-esque building.

Beneath the buzzer, a metal plate with raised lettering read:

I could hear the buzzer echo through the building after I pressed it. No answer.

In an attempt to avoid being rude, I opted to give it a minute or so before buzzing again.

That minute or so soon became five. I pressed down on the button once more, but before I could even hear the sound this time, the door cracked open.

“Can I help you?” a rather perturbed-sounding voice boomed through the opening. There didn't appear to be any lights on inside the entranceway and, combined with the gloominess outside, I couldn't make out more than a tall outline of the voice's owner.

“You posted an ad in the paper about a Personal Assistant.”

“It's fine, Beauregard, they may enter,” a new voice called out from what sounded like another room. “Wipe your feet!”

The door creaked open further, fully revealing the figure behind; a Feline, covered head-to-toe in a mix of brown, black, and white fur, donning an unbuttoned navy comfort jacket over a slightly wrinkled white oxford shirt and matching navy slacks.

“You heard the lady,” he said, motioning inside and giving me room to enter. “The Detective you seek is in her study. Last door on the right.”

I walked into the dimly-lit entranceway, and down a narrow hallway towards the only open door. The walls were lined with portraits and statuettes, most of which I was pretty sure I recognized... just not as cats. They were all cats.

The study looked like something right out of a Sherlock Holmes television special. A massive fireplace flanked on both sides by floor-to-ceiling bookshelves faced the doorway, a small table and ornate blue velvet chairs sitting in front. The lighting situation matched the rest of the building, though everything appeared much brighter thanks to a large window in the back of the space. In front of the window, behind a cluttered walnut mid-sized writing desk, sat a tall leather office chair, back facing me and the rest of the room.

From the space between the chair and the window, a voice I’d recognized from earlier broke the silence.

“Hush now, just a moment!” An arm emerged from the right side of the chair, holding out a light-orange paw.

I complied, and paused for a length of time that, in another wave of nervousness, felt much longer than it actually had been. From where I stood, I could faintly make out two little squirrels darting around a tree outside the window. Our conversation resumed at almost the exact moment the two critters had scampered out of view.

“Brilliant! Where were we?”

The chair spun around, and its occupant stood up. Another Feline, fur almost entirely covered by a full brown tweed suit and cap that allowed their ears to poke out the sides.

“You found our posting, yes?” They pushed the chair against the desk and began to walk towards me. “Bravo! Wasn’t sure if anyone would, but I wasn’t about to pay the ghastly amount the Gazette demands for quote unquote extra visibility these days. Your name?”

“My…” I was still struggling to recover my train of thought.

“Your name, lad. Surely you have one?”

“Robson,” I replied in an almost stabilized voice. “Spence Robson.”

“Oh, you poor thing… Nevertheless, pleasure to meet you, Robson.” She extended her paw. “Katya Kat. Renowned Private Detective. You may call me Detective Katya, and that, dear boy, is also non-negotiable.” 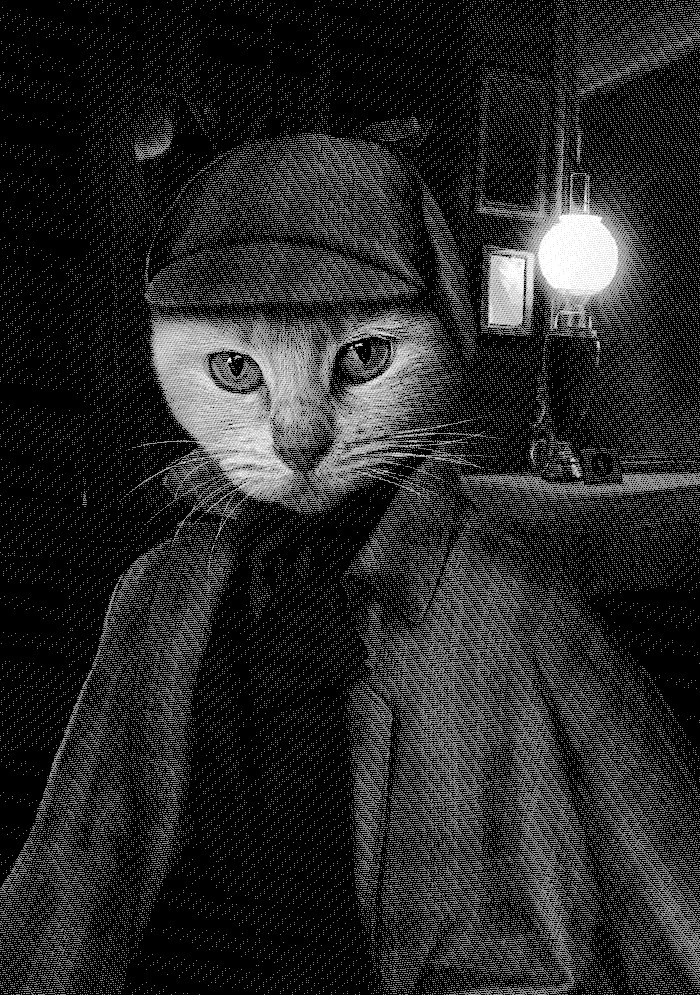 The gentlecat from the front door poked his head into the study.

“All is well, Beauregard,” Detective Katya shouted across the room. “Robson and I are just getting acquainted.” He nodded, and continued down the hall.

“Beauregard Moon. You'll have to forgive him. Still not used to playing doorman.” Shortly after she spoke, a loud thump, followed by a crash, echoed throughout the hallway. She winced. “Still not very graceful either, I'm afraid.”

“So,” Detective Katya said. “Here you are. Here we are. Tell me about yourself, Robson. Where are you from? Any prior experience with detective work?”

“Well, I was born in Miami, Florida. I lived there through college and...”

“Goodness, no. Your major?”

”...Can that… be a major? To be completely up front with you, I don't have much detective work experience, at all, really. Your posting was the first opportunity I'd ever discovered.”

“Well,” she said, walking closer to me, narrowed pupils locked on mine. “Lucky you.”

“That's perfectly fine. You don't need detective work experience to do as you're told... unless you're a nitwit. Are you nitwit, Robson?”

“Marvelous. Kindly keep it that way. Now, I presume you're curious about hours. This is a role that demands you keep your schedule flexible and open. Not a nine to five in any way, shape, or form, understood?”

“Understood. I'm still fairly new to town. Not much going on.”

“Spectacular! Beauregard will get you some necessary paperwork and show you the way out. We'll be in touch very soon.”

I turned around, rather startled to see Beauregard Moon in the doorway, large yellow envelope under his arm, motioning for me to follow.

I paused, then answered with the first thing that came to mind. “You have my word.” 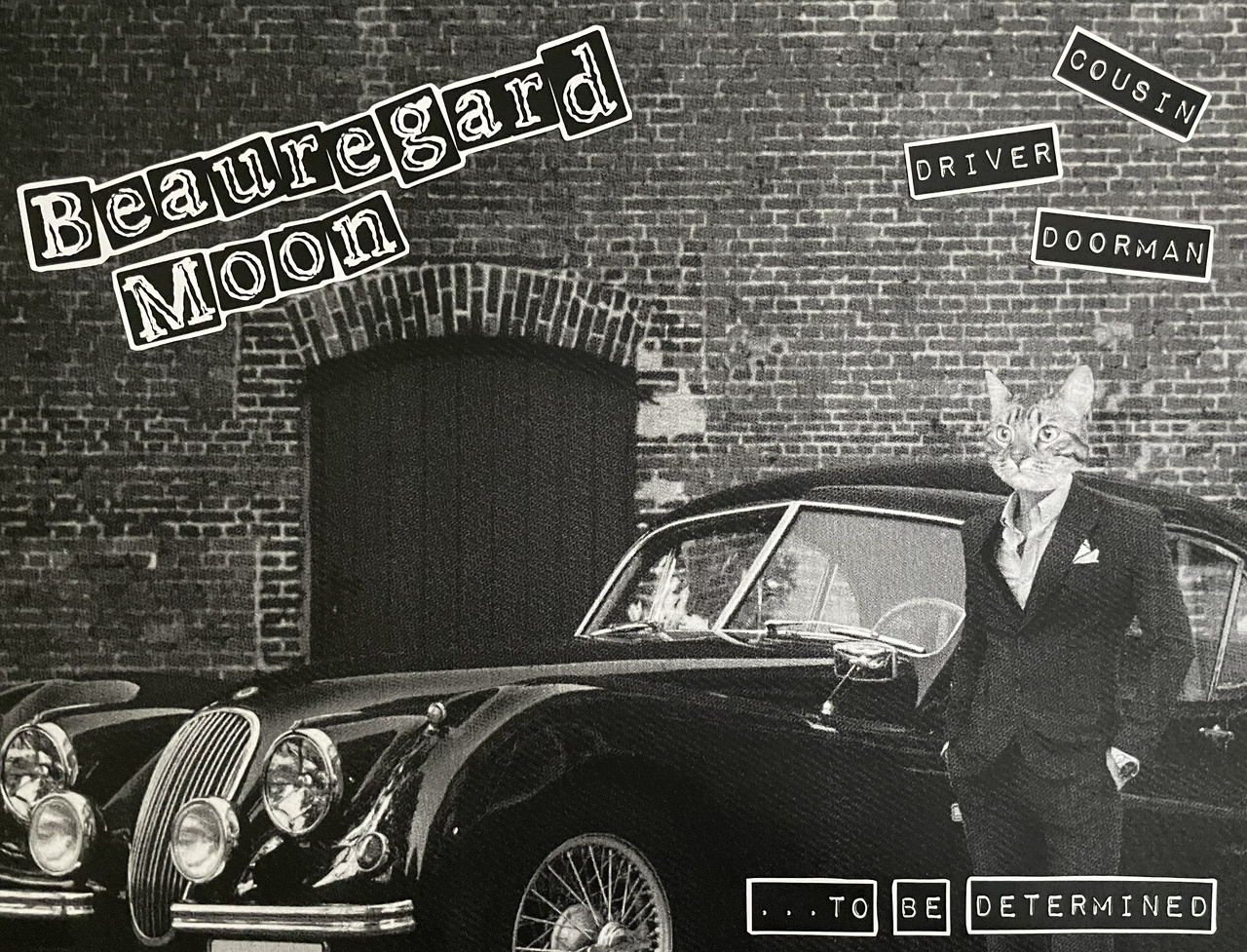 Chief Constable Lorenzo Black stared down at an empty coffee mug as the line to the machine inched forward. The station had grown five heads in the last year and still just one coffee machine for the lot of them. It sat about fifteen feet away from his office door, though. One of the few perks of his recent promotion.

“Things should be moving faster now, sir,” an officer holding a bear-shaped mug, filled to the brim with coffee, said as they passed. “Just put on a fresh pot.”

The line moved up another. Two more to go. He looked to his right, noticing that he was now standing in front of the office's only copy machine. Turning the yellow tint many electronics from the late twentieth century turned, it must have been as old as the station itself. He doubted that in its entire lifespan it had ever seen the same lines as its coffee-dispensing officemate.

The morning had been off to a busy start, per usual. Only a few high-ranking officials had private offices, with everyone else occupying dark brown wooden desks scattered about an open green carpeted main area, already buzzing with chatter about ongoings and open cases of the day. Adding to the buzz, shortly after he'd turned his head away from the copier, a familiar ring echoed from nearby.

“Oh for goodness sake, is that my phone,” Lorenzo yelled out, knowing full well it was. Nobody else in the station would have chosen to set Queen's “Don't Stop Me Now” as their office ringer, and if they did, how dare they!

Not about to abandon his place in line after making it so far, he yelled out again. “Could somebody please answer that!?”

“You have my permission!”

An officer at a nearby desk sprung up and darted into Lorenzo's office, just before Freddie Mercury could inform everyone that he was having a ball.

Lorenzo couldn't hear the conversation over the chatter, though it didn't last long. The officer soon poked his head out from the doorway.

“Sir, I've got Detective Harper on the line. He says it's important.”

“He says there's been another one. Last night.”

Lorenzo's grip around the handle of his mug tightened. “Seriously!? The same...”

Lorenzo took a deep breath, then let out a frustrated sigh while running his free hand through what remained of his dusty gray hair. “You tell Harper we're sending more heads over there immediately.” He turned back around to face the coffee machine.

Lorenzo let out a another long sigh. “What!?”

“Detective Harper also wants to know if we should loop in...”

“Absolutely not! I will not have her sticking her meddlesome paws into this one.”

“Roger, sir.” Hewitt, disappeared back into Lorenzo's office just as Lorenzo finally reached the front of the line. He looked down at the machine to see the carafe empty. 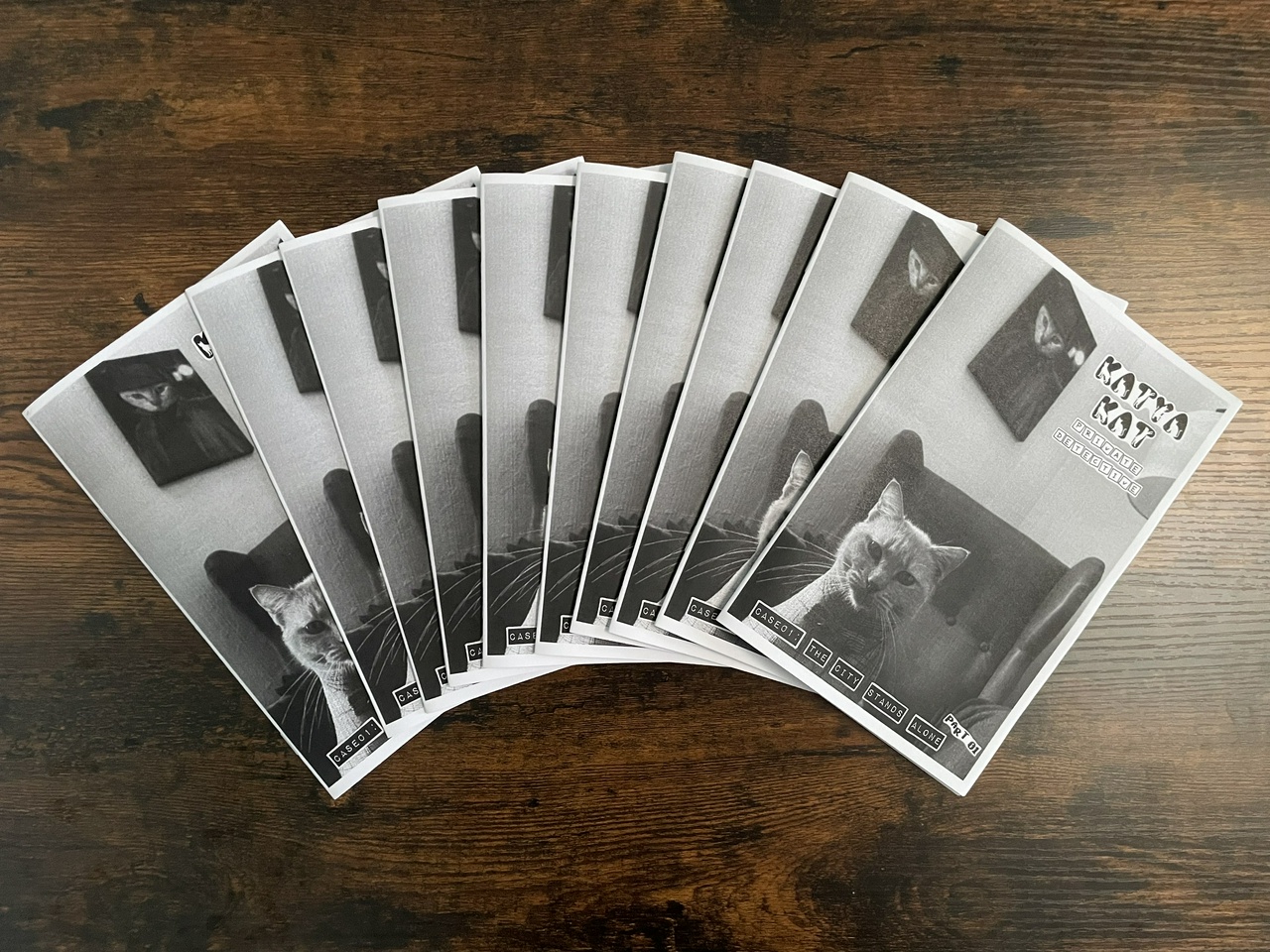