On a recent visit to my family home in South Florida, I discovered a surviving draft of an attempt I'd made at writing a fantasy novel between fifth and sixth grade. The lost-to-time full version stretched across almost five hundred hand-written wide-ruled notebook pages, though this early draft only collected the prologue and first couple of chapters.

With the pandemic rendering my usual South Florida social adventures impossible, I thought it might be fun to spend some of my new free time being my own editor. Below is the prologue to my fifth grade fantasy novel, Dark Empire, as edited by a thirty-five-year-old me. 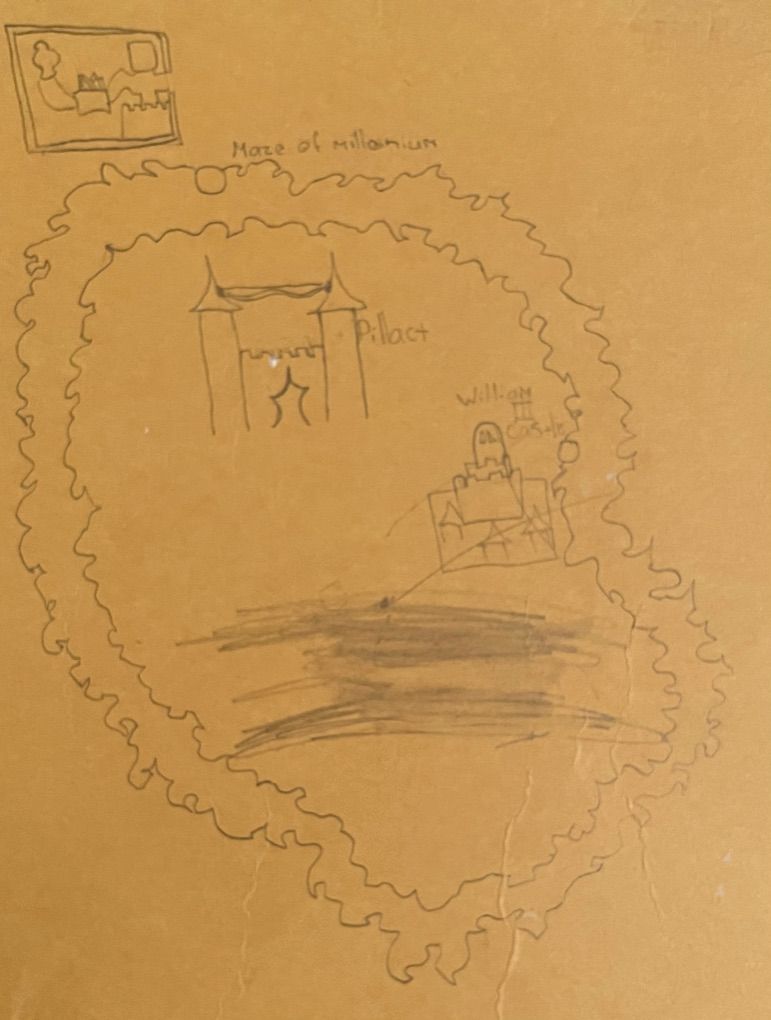 Everyone remembers the day the man in black breached the maze.

“My lord, The Dark Emperor’s forces continue to grow. I’m not sure how much longer we can hold them off.”

Rogan, First General to the King, could hardly speak through struggles to catch his breath, upon entering the castle throne room; the young man’s dirty blonde hair made dirtier from ash, which had mixed into a sludge of sweat and blood.

King David sat atop his throne, accompanied by his advisor, Ganji, and his other Second Generals, James and Austin; all eyes shifting between the giant entrance doors and a small decorated box to the right of the platform.

For years, a sorcerer calling himself the Dark Emperor had been attempting to reach castle Pillact and steal the box’s contents. Nobody knew his motives, and the Dark Emperor never explained himself. This evening, had been an attempt like no other, however, bringing with it a massive army, surrounding the castle perimeter. Numbers continued to increase to those beyond that of King David’s army.

Screams of soldiers on both sides grew louder, echoing through the halls, and ears of everyone within. It was all only briefly drowned out by the sound of the throne room doors pushing open once more, revealing a single member of David’s highest-ranking battalion, armor badly battered and face so gashed that none of the generals, nor the king could tell exactly who he was. He had only made it a couple of steps in before collapsing to the ground.

“We tried,” he gasped. “We tried, but it was hopeless. There are just too many of them. Save yourself, my king.”

The soldier lowered his head back to the ground, never to speak again.

David, normally known for his calm, became frenetic, hand grabbing around the side of his throne for his sword. Shaking, he gripped the handle, holding it close to his side. James and Austin ran to the two golden doors of the throne room, pushing them closed and barricading them, with the help of a number of soldiers.

“He’s sure to come here.” Austin said. “It’s best that we at least delay him.”

Ganji turned to his king. “What should we do with Taleb?”

“Leave it be,” David said. “If we hide it, he’ll find it. We’re going to have to try and protect it ourselves.” He stood up from the throne and unsheathed his sword.

“Even if that means we die trying.”

The generals, accompanied by Ganji, rushed to Taleb, drawing their own weapons as well, the yells continuing to grow louder, as if they were coming from the next room.

It wasn’t long before the barricaded doors began to shake, the rods holding them starting to come loose. It soon became too powerful for the barricade to hold, and the doors burst open, sending bodies and pieces of shattered support rods in every direction while smoke crept into the throne room. The hearts of everyone began to beat faster, knowing very well what would be revealed when the smoke faded.

Out from the smoke he stepped; eyes, as cold as ice, and armor as black as night. His pace remained slow as he walked towards the group, stopping just a few feet from the king.

The man in black gave no introduction. He didn’t need one. There wasn’t a soul in the room who didn’t know who stood before them.

“The Dark Emperor,” Austin said, under his breath.

“I’ll never give it to you,” the king yelled.

“What a shame. Well then, I guess I’ll just have to take it.”

With that, he raised his hand, causing a green beam-like staff to materialize in his palm. David held his sword out in front of him, prepared to protect Taleb with his life, and charged the Dark Emperor, swinging frantically. Unfortunately, not a single swing hit its intended target, passing right through the Dark Emperor, as if he had swung at a ghost.

“Is that the best you can do,” the Dark Emperor laughed. His staff began to glow an even brighter green, as the three generals near the back of the room watched in terror. The outcome of this encounter was becoming very clear.

A beam emerged from the end of the staff, hitting the king’s chest, knocking him to the floor.

“Pathetic,” the Dark Emperor laughed again. “Is that really all you’ve got?” He paused briefly before shifting his glance towards the generals. “I guess so. I believe that means the three of you are next. Now, are you going to play nice, or any of you planning on playing hero too?”

Each man stood perfectly still for what, to them, felt like an eternity. Though none uttered a single word, each knew what the other was thinking. He couldn’t be allowed to have it. They pointed their swords at the intruder.

“We would give our lives to protect Taleb,” Rogan yelled. “You may have defeated our King, but you won’t defeat the three of us together.”

“How foolish to be so certain,” the Dark Emperor said. “And as for your lives… It will be my pleasure to take them.”

His staff continued to grow brighter as he walked towards the three men, until it had changed into a blinding white.

All ran towards him, attacking in almost perfect unison, and all watched each attack, as with David earlier, pass through the Dark Emperor without so much as a scratch. They too, like their king, soon fell victim to his staff.

The man in black looked down at the lifeless bodies on the floor and laughed.

He turned to face two of his own soldiers, who had been waiting and watching quietly outside the throne room entrance.

“Do whatever you’d like to these… ants, but do ensure they never see the sun again.”

The soldiers ran to the fallen men as the Dark Emperor shifted his focus back to the small locked box beside David’s throne. Another beam from his staff shattered the lock as he began to walk towards it.

The box opened to reveal an ornate glass bottle of thick purple liquid. As his soldiers dragged the first two men from the room, the intruder in black removed the bottle, placing it into an empty pouch on his side.